A Meaty Lasagna with Spinach, Eggplant and Red Pears

Lasagna is one of my favorite meals to make because it’s rich, fulfilling and complex.  There are so many different ways of preparing it, lasagna screams noisy food.  Preparation can take a while to make if it is good but a large lasagna can last for several meals.  The basic lasagna recipe calls for layers of pasta, interspersed with tomato sauce, and melted cheese but with a few more added ingredients a lasagna will come alive. 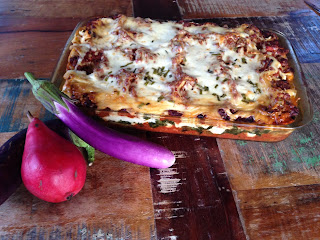 The tomato sauce is the most important part of a good lasagna.  I believe the sauce is noisier if it is made fresh but it can also be store bought and meat can be added such as sausage, chicken or as I prefer grass fed ground beef to liven it up.  The beauty of a lasagna is that many different vegetable and or fruits could be incorporated into the recipe without throwing it off.   I add local fruits and vegetables such as spinach, eggplant, pears, or apples to add subtle flavor and textural elements to the sauce.  My other secret ingredient in tomato sauce is adding a little unsweetened cocoa powder for richness and color.  Tomato sauce is often best when cooked the day before and allowing extra time for the flavor to develop before using.

To prepare the sauce start by small dicing a large yellow onion.  Dial in the stove top burner to medium high heat and put a large sauce pot preferably with a thick insulated bottom to ensure even heat distribution on it.   Add ¼ cup of olive oil to the pot when it’s hot and sauté the diced onion with one tablespoon of minced garlic until translucent and then add 16 ounces of grass fed ground beef.  Continue cooking, stirring until the beef is broken up and browned.  Peel and chop two carrots, two stalks of celery and four button mushrooms then add them to the pot.  Reduce the stove top heat to medium and continue stirring with a wooden spoon to avoid anything burning to the bottom of the pan.  Once the carrots have become tender add 72 ounces of diced tomato and 12 ounces of tomato paste.  Set the burner on low heat and simmer the sauce for 1 hour while it reduces.  Stir in 2 tablespoons of unsweetened cocoa powder, 1 teaspoon of sea salt and 1 tablespoon of savory herbs including thyme, parsley, and oregano.  In a food processor puree and pulse the thick sauce to help break down any large pieces.  Cool down the tomato sauce in a separate container surrounded by an ice bath.

Heat up a cast iron pan on high heat and add ¼ cup of olive oil.  Medium dice two Thai eggplants and two red pears.  Sauté the eggplant and pear until tender and brown along the edges. Set the pear and eggplant aside until ready to use.

Prepare 1 pound spinach by blanching it in a boiling pot of water for 1 minute.  Remove the spinach from the water and place it in a bucket of ice water to preserve its color.  Squeeze out the excess water from the spinach and reserve until ready to use.

In a large bowl combine four cups of all-purpose flour, 4 teaspoons salt, 4 tablespoons olive oil, and 8 eggs.  Form the dough into a ball and press it flat on a smooth surface.  Use extra flour to dust the surface so the dough will not stick.  Using a rolling pin flatten the dough to 1/8 inch thick.  Using a knife cut strips 13 inches long and 3 inches wide.  Cut 9 or 12 strips depending on how many layers of pasta you want in the lasagna, I usually do four layers.  Chill the pasta in the refrigerator separate the strips with pieces of parchment paper until ready to use. 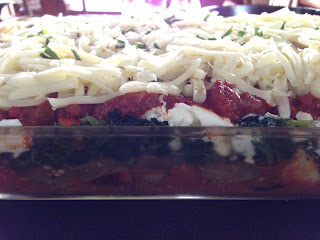 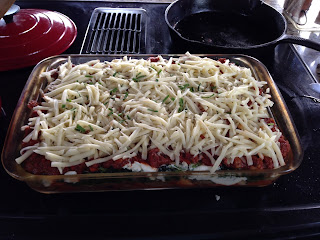 Cover the lasagna with tin foil.   To avoid the foil sticking to the melted cheese, place a skewer straight up out of the lasagna to hold the foil up.  Bake for one hour but remove the tin foil 15 minutes before removing the lasagna from the oven so the cheese gets golden brown and bubbly. 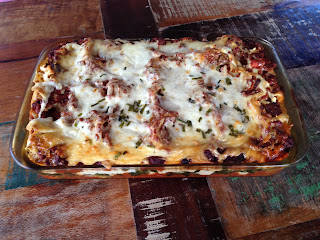 
4 Teaspoon Salt
Posted by overandoutkauai.com at 3:34 PM No comments:

I came up with the premise for Noisy Food in 2011 while I was living in Aachen, Germany.  I thought it was a great way of describing food.  At the time I was eating a lot of crusty bread from the local bakeries and enjoyed hearing it crunch as I ate.  Eventually I began thinking of Noisy Food as a rating system to express how complicated, tasty, or creative a particular food was in comparison to others.  The factors to consider include the source of the food, the ingredients, the preparation, the tools used, and the level of creativity.  Generally speaking, the noisier the better but it’s true that food could be too noisy; think messy plates, muddled flavors, and haphazard color combinations.
The first criteria of Noisy Food to consider is the source the food.  Where did it come from? How was it grown?  For example if you hunted, grew, or foraged for the food it would be noisier than something you bought in the store.  Organically grown food is noisier than conventionally farmed food because the farmer must have a greater understanding of the food; how it interacts with the soil and other crops and what it needs to stay healthy.  The effort you put into sourcing the food makes it more interesting and provides a dialog that would otherwise not exist.  Noisy food should get people talking.
Secondly, the time input of ingredients used in a dish make it noisy.  If something had to die to be harvested, it’s obviously noisier than an apple picked from a tree.  The more work that went into growing the food the noisier it is.  Most fruit trees, such as coffee, take 3-5 years to produce fruit but will continue producing fruit for 20 years.  Asparagus can take up to three years to grow but will continue growing for 20 years.  Pineapples take two years but only produce one fruit in their lifetime.  Papaya can produce fruit in 6 months.  To cook and clean an artichoke might take an hour.  To bake a loaf of bread might take two hours.  To produce sourdough bread it might take 12 hours.  To ferment and produce chocolate takes weeks.  To brew beer might take a few months.  To distill and age alcohol may take years. Taking time input into consideration, I conclude chocolate, alcohol, and coffee to be some of the noisiest foods.
The preparation of food is vitally important in making it noisy.  Some foods are best left uncooked while others must be cooked.  I believe a crisp raw vegetable could be just as noisy as a piece of homemade bread.  The cook must think about the highest good for the end food product:  what is going to preserve the color of the food, what will boost the health benefits of the food, and what is going to bring out its best flavors.
Let me digress and show an example of how a numbering system could be used for cooking a chicken egg.  If you raised the chickens and harvested the eggs you get two points right away.  If you fry the egg in a pan you get two points because the edges are crisp and crunch when you eat it.  If you cover the fried egg in cheese you get three points.  If you whip the egg and make scrambled eggs you get two points.  If you whip the egg and make an omelet you get three points and four points if you fill the omelet with deliciousness.  If you poach the egg you get two points, if you cover it with Hollandaise sauce you get three points.  If you hard boil an egg you get one point but if you then peel the egg, split it, remove the yolk, make a spicy deviled egg filling then pipe it back into the cooked egg white you get four points. You get the idea.
The appearance of food is hugely important in making it appealing.  I believe a beautiful looking dish makes it noisy.  Food presentation should be tall and tight, clean, and have striking color combinations which all play into how noisy it can be.  Keeping food concise on a plate looks better than having it spread out.  Controlling what sauces are used and where the sauce is applied should be considered.  The color of ingredients is vitally important: for example, most vegetables retain their color when they are fresh but lose their color when cooked, so blanching and ice baths are used to hold the color. Think of your favorite dish: how does it look? Could its appearance be noisier with a few tweaks?
The tools used to prepare the food plays into its noise factor.  A smoker is noisier than a dehydrator.  A broiler is noisier than a convection oven.  Cutting vegetables thin on a mandolin is noisier than cutting with a knife.  A deep fryer is noisier than boiling water.  The more complicated or unusual the tool used in the preparation, the noisier the finished product.
Creativity is the last factor in determining noisy food.  We are driven by our passions and that should manifest physically into our finished creations.  Your unique ideas should come together seamlessly to create the uniqueness of your finished dish. We each long to be original once we tire of doing the same old thing.  We want to contribute new ideas to the food world.  The goal of noisy cooking should be to produce new types of food that get people talking about it.  Take noisy food to the next level, let it speak for itself.
Posted by overandoutkauai.com at 3:40 PM No comments: