The ancient Olmec civilization in Mesoamerica was the first to consume chocolate.  The cacao tree is native to this area in modern day Mexico.  They consumed it as a frothy drink made in this fashion; first the beans were mashed into a paste with chili peppers and corn meal then water or fruit juice was added to the paste which was then left out to ferment for several days.  Ancient clay pots have been discovered that still contain the residue of the chocolate concoction.  The traditional way of serving the cold drink was shaken to create a layer of foam on top.  Eventually the cooks began serving the drink warm along with other spices similar in fashion to the hot chocolate we drink today.

For the rest of the world the chocolate craze began as unsuspecting Spanish explorers brought cocoa beans back from Latin America to Europe in the 1500’s.  Europeans were at first turned off by the bitter taste of the alkaloids in the beans so it would take another 300 years before Dutch chemist Coenraad van Houten began using alkaline salts to reduce the bitterness of the beans.   Eventually he would go on to invent a press to remove cacao butter from the beans thus harnessing the ability to preserve beans longer and produce more chocolate with less beans.

The first step in producing chocolate is to cut the cacao pods off the tree with a sharp knife.  Split the bean pods in half carefully so the beans are not damaged.  Immediately place the slimy beans in a wooden fermentation box outside in a shady cool, place.   Place a banana leaf in the bottom of the box and place another over the beans.  The more beans you have the better.  The beans need daily rotation to ensure they are draining properly and they are being aerated.  The beans will begin to generate heat after a few days as they begin to ferment.  It is to be expected that fruit flies will be attracted to the beans and they actually help the beans ferment as they consume the sweet liquid draining off of the beans.  Continue to turn the beans every day for a week to avoid any mold forming on the beans.

Eventually the beans will become dry and tacky, this is the time when you should begin drying them in the oven.  I place the beans on an oven tray and set the oven on 100 degrees Fahrenheit for 24 to 48 hours.  The beans will continue to dry out.  If the beans are not dry enough they will not roast very well.  Roast the cacao beans in the oven at 400 degrees for 15 minutes until they crack and then lower the temperature to 325 degrees to continue baking for another 20 minutes. 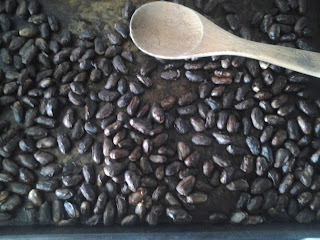 Once the beans cool the chaff and skin will begin separating from the bean which is now called the nib.  The nibs are very fragile and will occasionally crack.  Be sure to keep all the small pieces of bean while discarding the skin and chaff.  Once all the nibs are cleaned I grind them into a powder using a burr grinder.  The finer the grind the better the end product will be.  I spend a good thirty minutes grinding, wiping down the sides and grinding again and again.

I add equal parts cocoa butter at this point to make raw chocolate or otherwise known as cocoa mass or cocoa liquor.  The cocoa mass is typically how raw chocolate is transported to traditional chocolate making facilities.  Then other ingredients such as milk, sugar, and soy lecithin are often later added to make sweetened milk chocolate.

I have just scratched the surface of knowing about chocolate making.  It is an intricate and in-depth study in which I plan on spending many more years perfecting.  Right now at home when I make chocolate, I add powdered sugar which is ultra-fine and very sweet to avoid the sandy effect of granulated sugar. 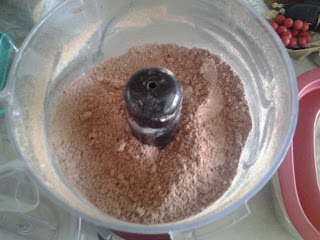 I use organic powdered sugar that has tapioca powder in it instead of confectionery sugar with corn starch.  Powdered sugar is typically only used in making fudge but I enjoy the sweet flavor and smooth consistency it gives my finished chocolate product.  I either use coconut oil or extra cacao butter as the fat binding agent.  I add vanilla extract for a little flavor.  The chocolate is meant to rest before tempering so I will usually form a block and set it aside in a cool dark place for a few days before tempering.

Tempering consists of warming up the chocolate up to 100 degrees so it melts.  If the chocolate gets too hot the fat will separate from solids.  Once the chocolate is melted and stirred it can be poured in to molds or shaped for a finished product.  I often pour them into small cupcake molds for serving. Enjoy! 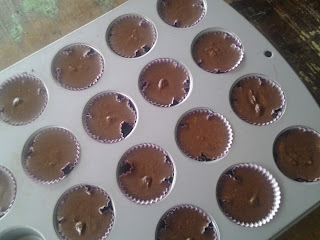 Posted by overandoutkauai.com at 10:17 PM